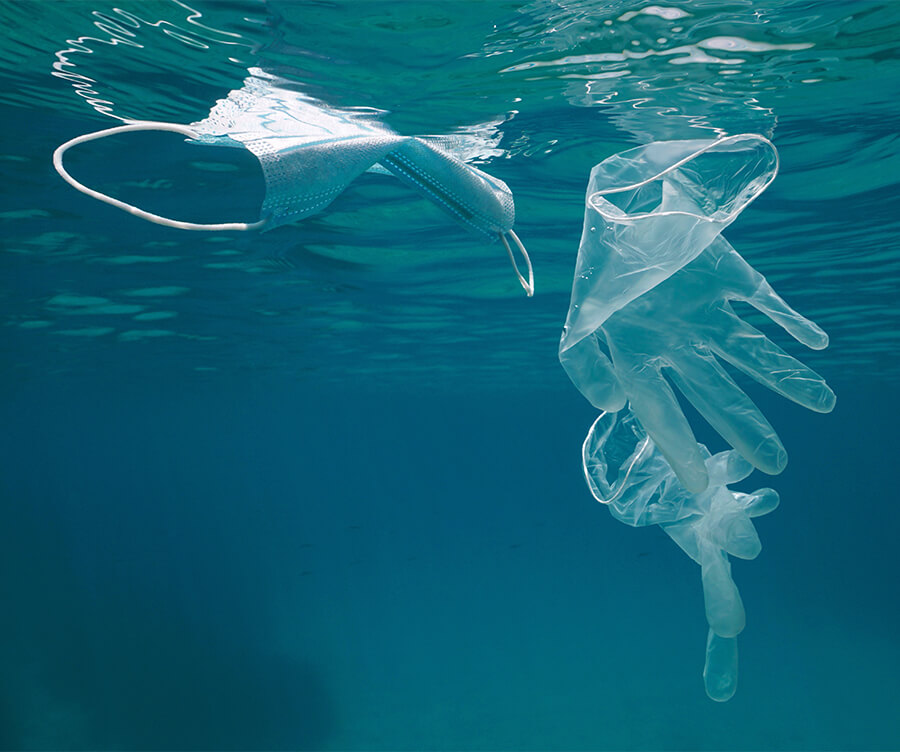 Before the Covid-19 pandemic, 8 million tonnes of plastic was already being dumped into the world’s oceans every year. Then the SARS-CoV-2 virus came and made things even worse.

It seems the deadly nature of the virus got everyone confused – governments and individuals alike. Many countries had already begun implementing policies to reduce marine pollution. But with Covid-19? Priorities changed. For the worst. Instead of focusing on environmental conservation, people became more concerned with saving lives. And this is what increased marine pollution during the Covid-19 pandemic. Here’s how it started and how it’s going.

The world over, there is some unexplained sense of trust in bottled water as opposed to tap water. And with an unknown virus gone on the rampage, the trust escalated many-fold. Purchase bottled water, drink to your fill, trash the plastic bottle. That is the order of the day. And a greater portion of the millions of plastic bottles trashed each day end up in the ocean

Governments ordered the public not to spend time in restaurants eating. But people must eat, especially those on the go. The only solution was to pack food for customers – and overpack it in a way that prevents contamination. Thus plastic food containers, polythene plastic bags, plastic straws, and the like were used in excess, and the final destination of the majority of them was the ocean.

Business really boomed for manufacturers of alcohol-based hand sanitizers. Even those who had never used such items before found themselves purchasing them in large quantities so as to stay safe from the SARS-CoV-2 virus. And this further inflated the production of plastic waste.

Also noteworthy is the fact that some of these products have microbeads in them – the tiny bits of plastic popularly known as microplastics. These are easily carried by rainwater runoff into rivers and finally into the sea.

For some, it was and is still a choice whether to wear facemasks or not. For others, it was a must – or else they risked big fines and imprisonment. And you agree that most face masks last just a couple of days. Picture a world of 7.5 billion people and visualize how many tonnes of masks are put in the trash bin every day.

While some Covid-19 facemasks are eco-friendly, others are made with plastic filters that can’t be easily broken down by decomposition.

Our highly cherished medical workers set out on a mission to save lives. They couldn’t spend a minute while at work without facemasks, gloves, and gowns. Experts estimate that a total of 129 billion face masks and 65 billion gloves were used every month during the peak of the pandemic. You can imagine how much of this is on its way to the ocean.

With most people working from home and entire cities in total lockdown, there was no longer need for vehicles. The extremely low demand for fuel forced producers to sell it at throwaway prices in order to stay afloat in business. Plastic manufacturers took the opportunity to boost the production of plastic products at low cost while making huge profits. Consumers on the other hand purchased even more plastic products due to the reduced prices. Who suffers in the end? The marine ecosystem!

7. Recycling of plastics was shunned

With greatly reduced prices for the raw materials needed to manufacture new plastic products, recycling became even more relatively expensive. This disheartens even the more honest and caring businessmen. To make more profits, the recycling of plastics was placed on hold.

Governments worldwide saw to it that only essential service providers reported working as usual. Now, some forms of waste collection are not categorized as essential services – especially those involving the saving of oceans. A lot of waste that was to be collected probably ended up in the oceans by the strong forces of nature.

9. People engaged in uncouth behavior in the name of releasing pressure

To be frank, people really felt caged. Staying at home for months is not the best thing to do on earth. Whenever the government eased the restrictions, millions of people flocked the beaches to enjoy their freedom. Remember that this coincided with the summer months for most countries in the Northern hemisphere. Such crowds, coupled with the carefree attitude, saw beaches all around the world littered.